The City sits at the nexus of the world. Once you're inside it, it is the world. Something drives the borders of The City ever-onward, crawling towards the horizon. Urban sprawl made real. Neighborhoods appear and disappear overnight, The City is filled to brim with no shortage of interesting characters, cultures...and monsters. That's where you come in, Slayer.

Slayers is a tabletop RPG of mercenaries and monster hunters for hire. Known by locals as Slayers, players wander a haunted city, cursed long ago to expand towards the horizon forever. Slayers help clean out the monsters that infest the alleyways and shadows, and those that the city seems to be manifesting on its own.

It's slay or be slain. Better get to work, Slayer.

Slayers uses a simple 4+ system to create an action filled session that moves quickly What sets Slayers apart from other RPGs is its emphasis on asymmetrical combat. Each class in the game uses completely different combat mechanics than the others, allowing the players to have an entirely unique experience at the table.

Slayers takes place in The City, an urban sprawl that expands forever towards the horizon. Made of an infinite number of districts, each version of The City will be unique to your table. Exploring and building the setting is just as important as hunting monsters! In the book you'll see examples of some districts and locations, to help inspire your next Hunt.

This is the new and updated version of Slayers! Slayers 1.5 brings new art, layout, and rules updates and changes. The new book includes:

To learn more about what was changed, you can watch Spencer describe the update in this video.

If you'd like to read the changelog, you can find it here.

Slayers is the winner of the 2021 Indie Groundbreaker Award for Best Rules. 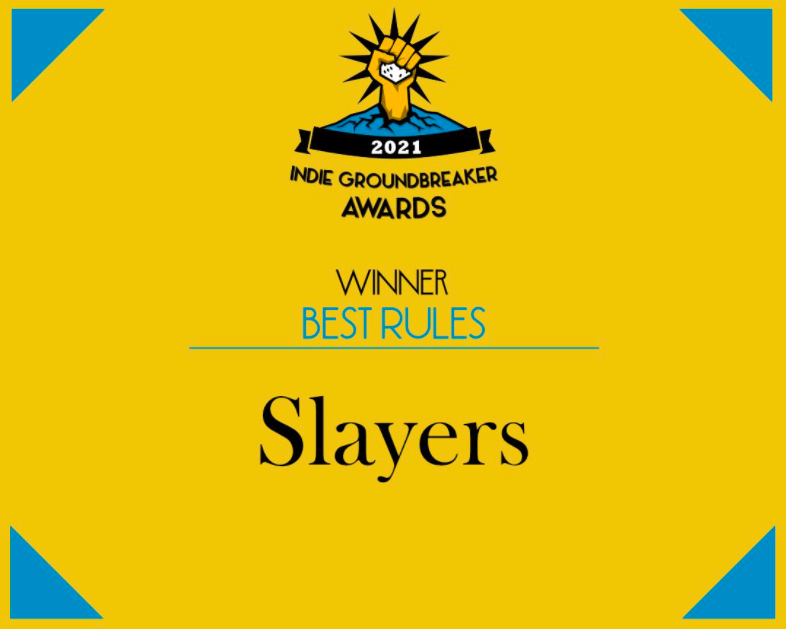 Slayers was nominated for 3 ENNIES: Best Rules, Best Game, and Product of the Year.

Slayers was listed as one of the Top 10 Fantasy TTRPGs by CBR.

Slayers was an honorable mention on Polygon's Best Indie TTRPGs of 2021.